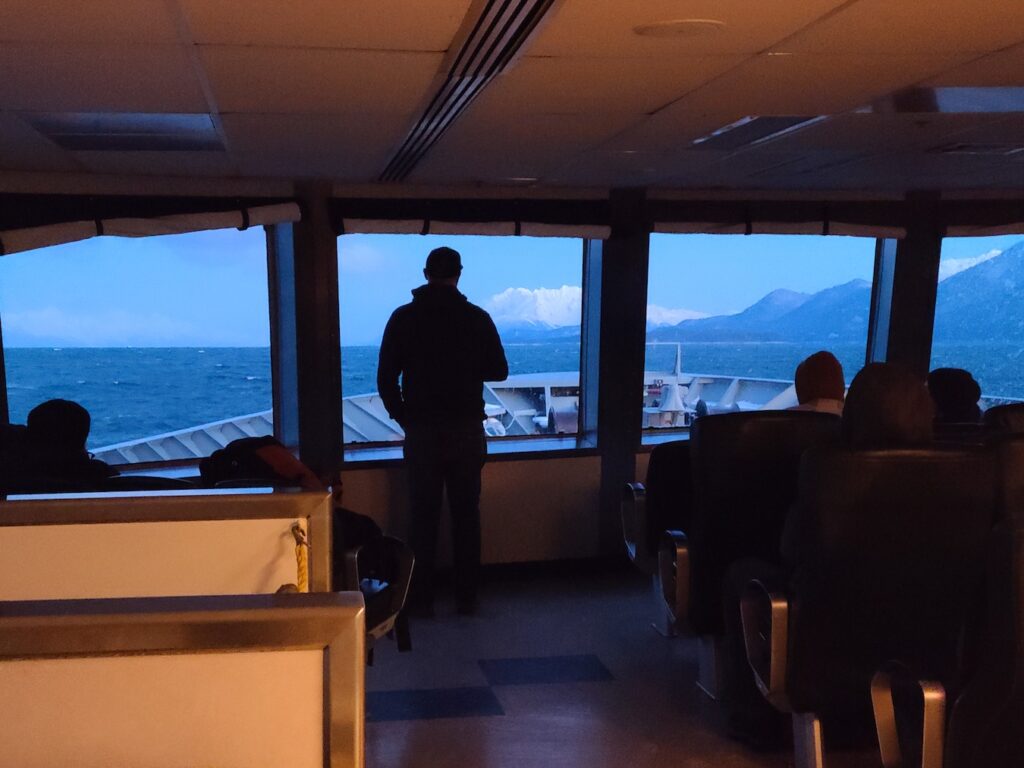 Many travelers arrived in Haines and Skagway Wednesday, after days of trying to get back from holiday travel. Rising COVID cases across the country, airline delays, and extreme winds in Southeast left passengers stranded in Juneau waiting for a break. KHNS’ Corinne Smith was one of those passengers, and filed this report.

Rhonda Newman spent the holidays with family in Cleveland, Ohio. She’s the assistant principal at the Haines School and was returning for the first day of the spring term on Tuesday, but was grounded in Juneau.

“This is my fourth day. And it doesn’t look like it’s gonna be today either,” Newman said, resigned.

So Newman and others hopped on a mid-day Alaska Seaplanes flight that took off for Haines, battling the northern winds. Seven passengers on board were relieved to reach the Chilkat Inlet, finally. The pilot prepared for landing at the Haines Airport, but turned suddenly – 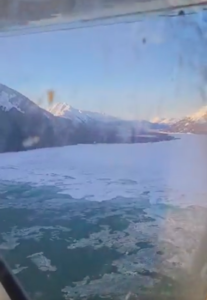 View of the Chilkat Inlet from Alaska Seaplanes, descending into the Haines airport. Shortly after the pilot turned around, winds were too high to allow for landing (Corinne Smith/KHNS)

“So we circled around and he tried again,” Newman said. “And then he just, he had to call it off the winds just we’re not going to allow us to land. So here we are. Back in Juneau…”

I was on the flight too, clutching my seat in the turbulence. It was more terrifying than any rollercoaster, that’s for sure. One person threw up. But we made it back to Juneau, and Newman and I are debriefing in the Seaplanes terminal.

“I’m disappointed. But I know that that pilot did his very best,” Newman said. “Because when we got back to Juneau, he landed the plane perfectly. So definitely a seasoned pilot who absolutely did his very best. And in the end, he just had to make a call for all of our safety.”

Haines eighth grader James Stickler was also on that flight with his mom Brandi, returning from spending the holidays in Idaho.

“Then they turned back to Juneau after I said the third times the charm,” Stickler said with a laugh. “I was really hoping we’d make it.”

It was the safest call, but an expensive one. The cost of hotels, food, transportation, and missed work days have added up for many Southeast Alaska residents this holiday season.

On Wednesday many passengers are able to catch the LeConte Ferry bound for Haines and Skagway. 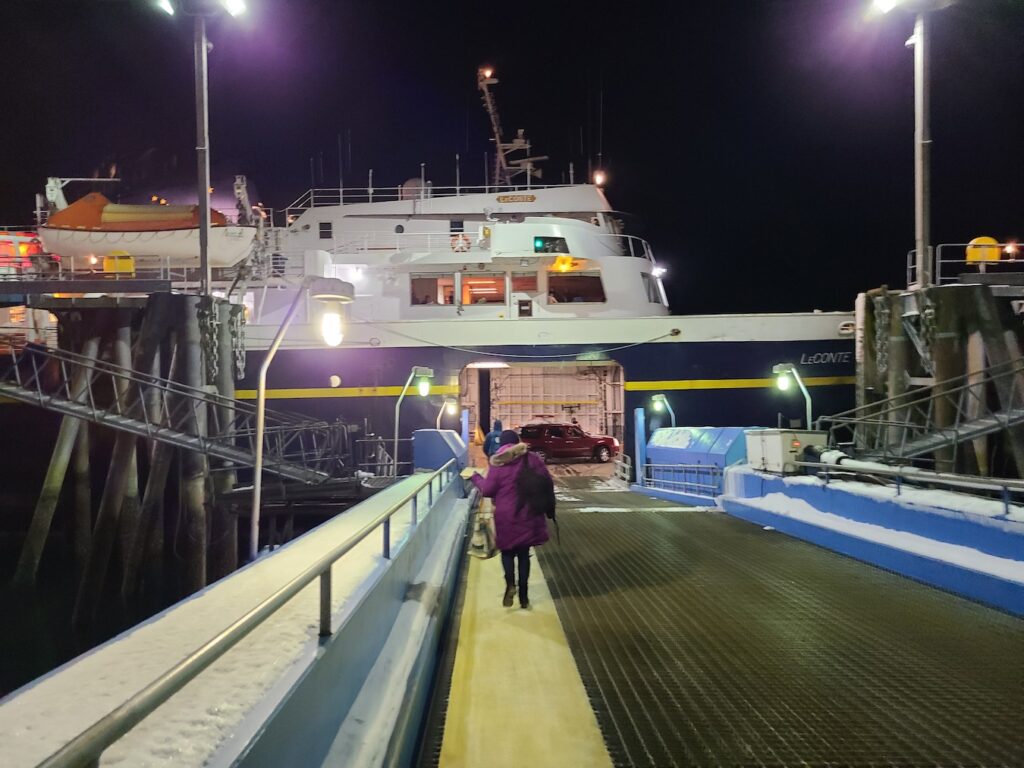 Some passengers booked both on the LeConte ferry and on Alaska Seaplanes Wednesday for Haines or Skagway, not knowing which would go (Corinne Smith/KHNS)

Samantha Romano is traveling with her husband and three young children from Michigan to visit her parents in Haines. They’ve spent more than half of their week-long vacation trying to make it to their destination. After three flights were canceled in Seattle, they arrived in Juneau and were delayed there for three days.

She says the costs have added up.

“So every time we go out to eat, it’s probably about 100 bucks, if not more,” Romano said. “And then we need snacks, and then the hotels and then this (the ferry) is what, $150 for us to get on. So it’s pretty much, our vacation money is pretty much done by the time we get to Haines at this point.”

She says transportation was also particularly difficult in Juneau, moving the three kids, all under the age of six, back and forth to the airport, in hopes of catching flights. 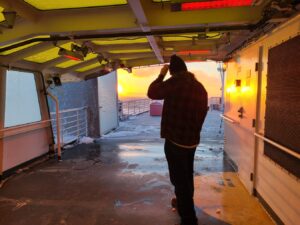 “We got into Juneau probably about like, 11:30 at night, Saturday night, and then we had to wait maybe two and a half hours for a taxi that didn’t show up. And the airport staff actually took us to our hotel.”

While the Romano’s waited, Seaplanes flights were either canceled or full out of Juneau. The ferry leaving Wednesday was a relief, but also faced severe winter weather, eight foot swells and heavy freezing spray.

“And then on this ferry ride, two of the kids got sick, including the six month old, and almost the husband,” Romano said. “But it’s calmed down a little bit. We’re excited to actually be in Haines.”

Even though they’ve spent half their holiday time in transit, Romano says her family has stayed positive. 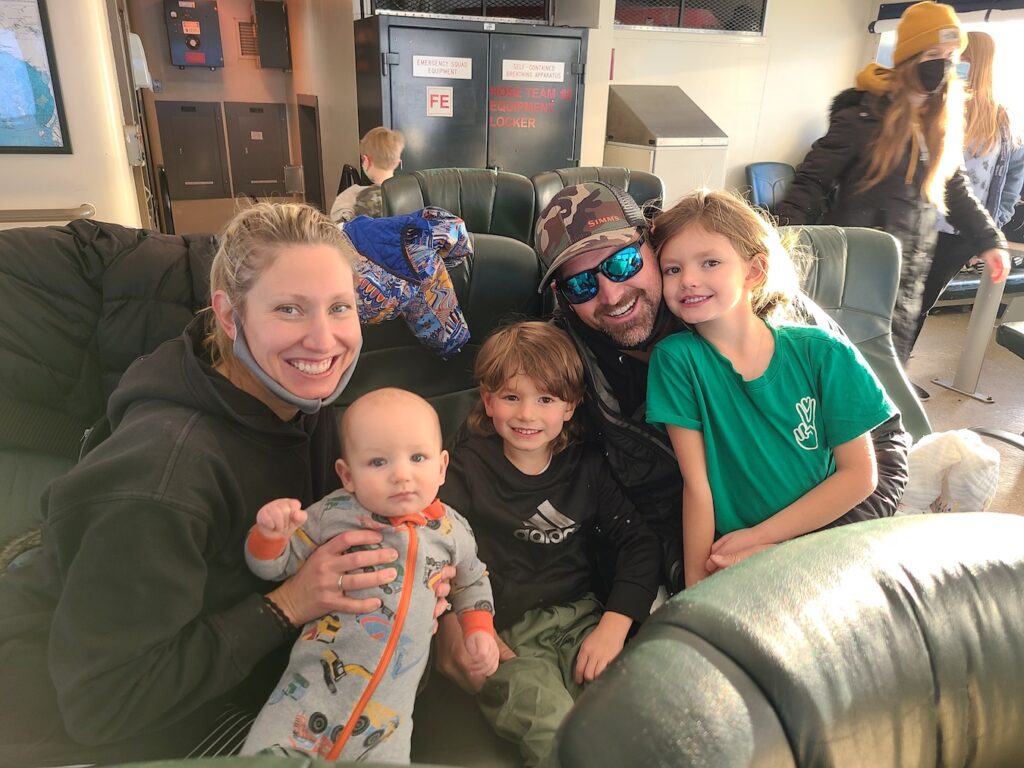 The ferry arrives in Haines under sunny skies, and passengers disembark with a palpable sense of relief. Some continue on to Skagway.

On to the next journey.