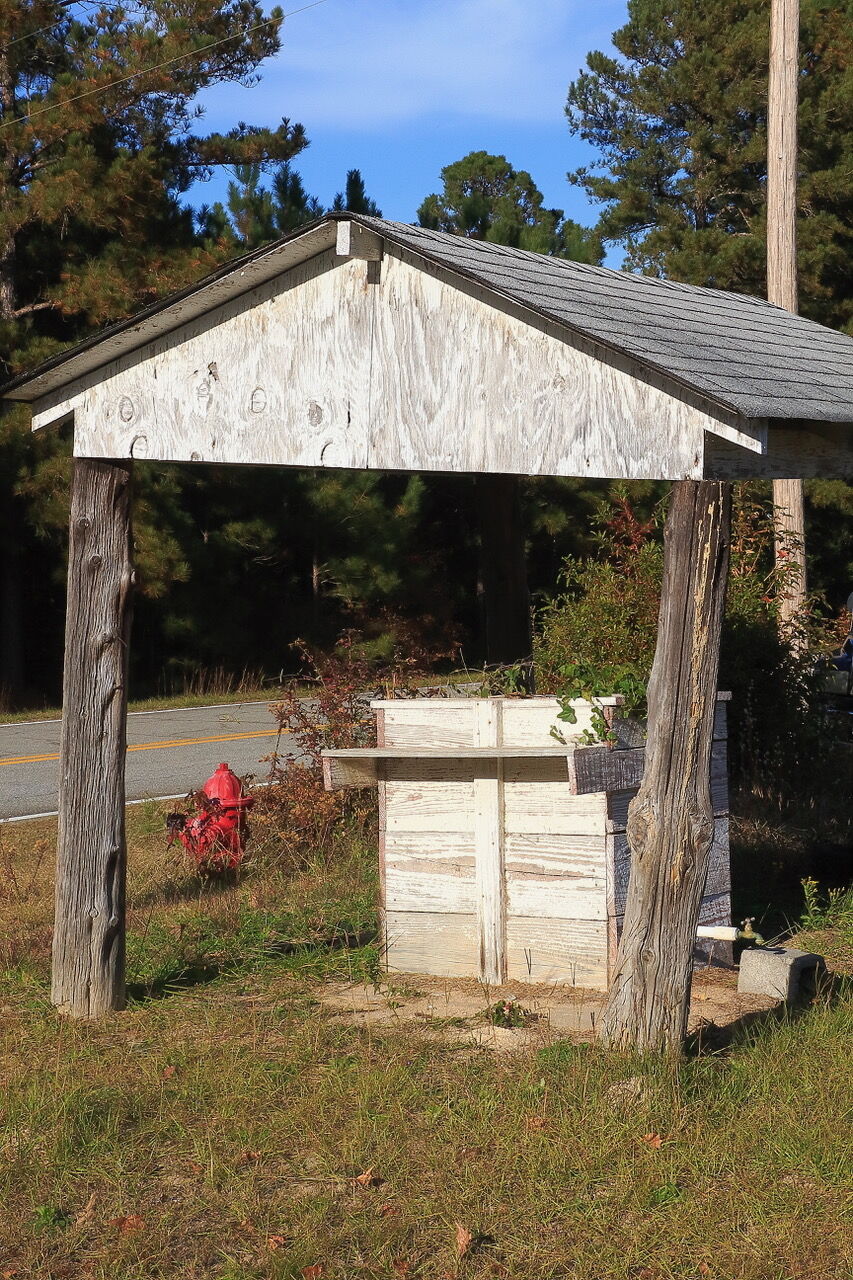 Two sources of water, a hydrant and an old, hand-dug well.

Driving a country road, I passed an old well house. It didn’t look like a wishing well. It looked rustic, more like a shed, a practical structure. I stopped and took a photo of the well. Right by it was a fire hydrant, so I knew city water had made its way out into the country. Out with the old and in with the new.

Driving away I thought about those relics we call hand-dug wells. My family home had a hand-dug well, and as a boy I’d peer into it and see water trickling in from the east. To this day, hand-dug wells intrigue me. Classify them as an older way of living and file them alongside plowing with mules and smoking hams in a smokehouse.

In the last four years, I’ve stumbled across — not into — four. One sits in woods in Greenwood County, and one hides in vines in Georgia at my grandmother’s homeplace. Another sits near an abandoned shack in Edgefield County. Lined with large matching quartz rocks sporting a bit of green moss, it’s a thing of beauty. The rotten remnants of an old well house have collapsed around its opening. The fourth well hides in periwinkle near the site of Badwell Plantation in McCormick County.

Forgotten hand-dug wells open to the sky lurk here and there. In certain areas, laws require property owners to cover them, but I know and you know pitfalls hide out there. Now and then someone will offer me advice. “When you go into fields and woods, watch out for snakes and old wells.” I’ve seen more wells than snakes, but accidents can happen. Keep your eyes on the ground. When I was growing up, a tale of someone who had fallen into a well came along now and then.

Back in my day, I knew of no one who had a drilled well. These newfangled wells are just six or so inches wide and there’s no risk of falling into those, but falling into an old hand-dug well happens.

Remember Baby Jessica? In 1987 she fell into her aunt’s well in Midland, Texas. Rescuers worked 56 hours to get her out. She survived but lost a toe. The man who crawled into a hastily drilled tunnel to retrieve her wasn’t as lucky. He didn’t drown or suffocate but the well killed him some eight years later.

Despite suffering claustrophobia, paramedic Robert O’Donnell crawled through a hastily drilled tight-as-nails tunnel to get Baby Jessica, and he became a media darling. Hollywood courted him, he appeared on Oprah Winfrey’s show, he shook hands with Vice President George Bush, and he liked all the attention. The warm glow of the limelight suited him. His fellow firefighters? Well, they wearied of his tales, experiences, and attention. But O’Donnell’s time faded and the day came when the media no longer sought him out. He became a forgotten man. In time, he found himself suffering depression, migraines, and painkiller drug issues. It got to be too much. On a scrap of paper he scrawled, “I’m sorry to check out this way.” Then the one-time hero put a shotgun to his head. He was 38.

O’Donnell’s tragic fate aside, when I think of old wells I think of dowsers and water witches. I think of wheelbarrows, picks, and shovels and the hauling up of buckets of dirt and rock. Hard labor in darkness with a lack of oxygen and the risk of cave-ins? They had no choice but to risk it, these men who dug their way to an aquifer, an underground stream delivering the elixir of life. Without a spring or creek or river, with city water far off in the future, the old wells were blessings, godsends you could say, and a lot of them are still out there.

Visit Tom Poland’s website at tompoland.net. Email Tom about most anything at tompol@earthlink.net.

Get opinion pieces, letters and editorials sent directly to your inbox weekly!