Every journey has a beginning; a milestone, a map or a moment that inspires you to travel. When we started traversing across rustic Bulathkohupitiya in the Kegalle district to look for less known Buddhist temples, little did we know that we would stumble upon a village that may have some clues to the origins of a dynasty. We learnt about Ganegoda much later on our travel, but our trail of lesser known temples in the beginning of a New Year started with this picturesque village called Alawatura. 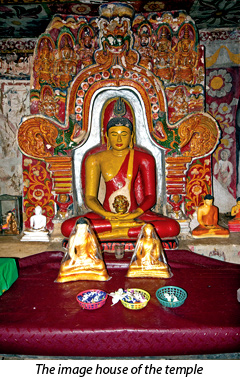 We drove from Avissawella towards Bulathkohupitiya turning right from Ruwanwella at a secondary road. Our destination was, however, Ganegoda Vihara in Alawatura, about four km from Bulathkohupitiya – Kegalle road, where a living testimony to the creativity of stone sculptors, remains an abode of artists who work their magic in stone for its intricate design and fine chiseling found in a village of Alawatura in Bulathkohupitiya , Beligala Korela in Kegalle.

At Bulathkohupitiya, we met two university students who were also history buffs. They joined to guide us to the Ganegoda temple which is hidden within the curve of an enormous rock boulder. From Thiriwana junction at Alawatura on the Bulathkohupitiya – Kegalle road, we turned right from a narrow bridge and walked around 500 metres on a narrow path which runs parallel to the gurgling stream of Alawatura Ela (stream) until we met the uphill climb of about 250 steps.

Having washed our feet in the chilled waters of Alawatura Ela which gently flows through a cluster of rocks, we began climbing the steps and realised this is not an easy trek although there was a forest canopy. The jagged outline of the distant hills, enveloped by white puffs of clouds, presented a pretty picture against the blue canvas of the sky. Below, the gleaming paddy fields, winding streams and clusters of villages nestling amid rubber estates appear enchanting.

Nicely laid stone steps line the 200-metre climb, but without sun rays even mid-noon, it is not impossible to sit on them. The path uphill is dotted with Na, Jak, arecanut and coconut trees, interspersed with other shade-giving trees. The climb is not hectic due to the picturesque scene. Although there is no resident bhikkhu at the Vihara, a Department of Archaeology had appointed a watchman from the village, who looks after the site. The well-preserved hidden cave shrine and its sprawling environs dotted with ruins are a visual delight for those with an interest in history and architecture.

It is always wise to choose a day when the sun is not too sharp to start your ascent of what is practically a vertical cliff. The only attraction at the end of the climb is a cave atop the hill which has rock cut Buddha statues in a well-decorated shrine chamber which was once a miniature version of the South Indian architecture style of the Gadaladeniya Temple in Kandy, believed to be dating back to 14th century AD.

At the lower terrace of the Vihara, we witnessed a Gaja Sinha (lion) guardstone that leads to the stone doorway of the shrine chamber of the upper terrace. The guardstone has balustrades rolling out of their mouths like an elephant’s trunk. In resemblance to the Gadaladeniya Vihara, many pillars end with squatting lions with bulging eyes and gaping mouths.

As we go around the lower terrace of the Vihara, the outer stone wall also features a number of intricately carved stone sculptures of a similar set of women dancers, spinning to the sound of drummers. Running along the line, one is drawn to a combination of three figures with four feet, two women with a man at the centre. Above the dancers is a frieze of snarling leopards moving from right to left, front legs raised and heads reversed. These artistic devices are more a resemblance to the work of the Yapahuwa Kingdom and some Hindu temples in South India.

In the Vihara premises, broken stone fragments are scattered everywhere. Beautifully carved stone pillars, lintels, great panels and huge crosspieces lie around. Some broken pillars are more than eight feet long. We can still see the notches into which the pillars were fitted. The pillars themselves are all elaborately carved with several floral motifs which are kept inside the shrine chamber for protection. 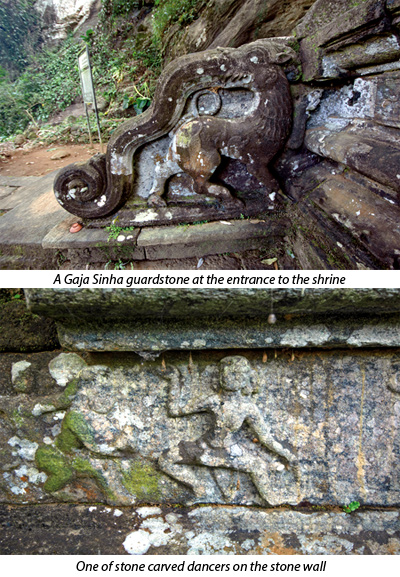 Another striking feature of the Ganegoda Vihara is a copper Sannasa dating back to the reign of King Buwanekabahu V (1371-1408). It is likely that the Vihara may have had royal patronage. The carvings are rich and elaborate.

But, with each step we took, it seemed we were going back in time, delving into the past, to another era. Yes, perhaps, Ganegoda is one of the last few vestiges of Hinduism. In days of yore, this rock shrine was a pilgrim centre for the Buddhists although it is closely associated with the Hindu architectural style.

We explored and photographed the drip-ledged natural cave that has made Ganegoda famous. What caught our attention on the hilltop was a huge rock boulder resting almost vertically. Villagers believe there had been a monastic complex above this shrine on the rocky cliff. When they dug the land, they had found elements of clay artefacts and bricks.

Explorer and first Commissioner of Archaeology in then Ceylon, H.C.P. Bell once visited the Ganegoda Vihara and expressed in his Kegalle Report that the stone carvings at the temple are most beautiful and unique when compared with other temples in the district. However, it is said that the frontal stone wall had been built according to the Kanchipuram Temple architectural style in South India.

As we went around the wall of rock art, another flight of steps led us to the imposing ruins of an upper terrace where the shrine chamber with stone carved doorway is built on the rock cave in the rocky boulder. The magnificent stone sculptured crossed legged Buddha statue is placed on a beautifully carved stone stand in front of an elaborately carved Makara Thorana (Dragon arch).

Legend has it that in ancient times, there was a tunnel from this temple. But we learnt from the university students who showed us a cavity at the edge of the wall of the shrine room attached to the rock cave, that the tunnel has been closed down. They showed us a small square water well which adorned the Vihara, and which does not run dry at any time.

The Ganegoda Vihara at Alawatura is a tranquil spot – a confluence of history and religion. The serenity you experience at the cave is worth the arduous uphill climb. Although the site is lesser known and hidden, a few visitors have begun visiting the spot to catch a glimpse of the magnificent stone carvings and the panoramic view of the hill. On our way back at noon, we spotted several village children playing splashing water at the Ritigaha Oya, a tributary of the Kelani Ganga that gently flows down from the Dolosbage hills passing Bulathkohupitiya on its way to meet the main Kelani Ganga.