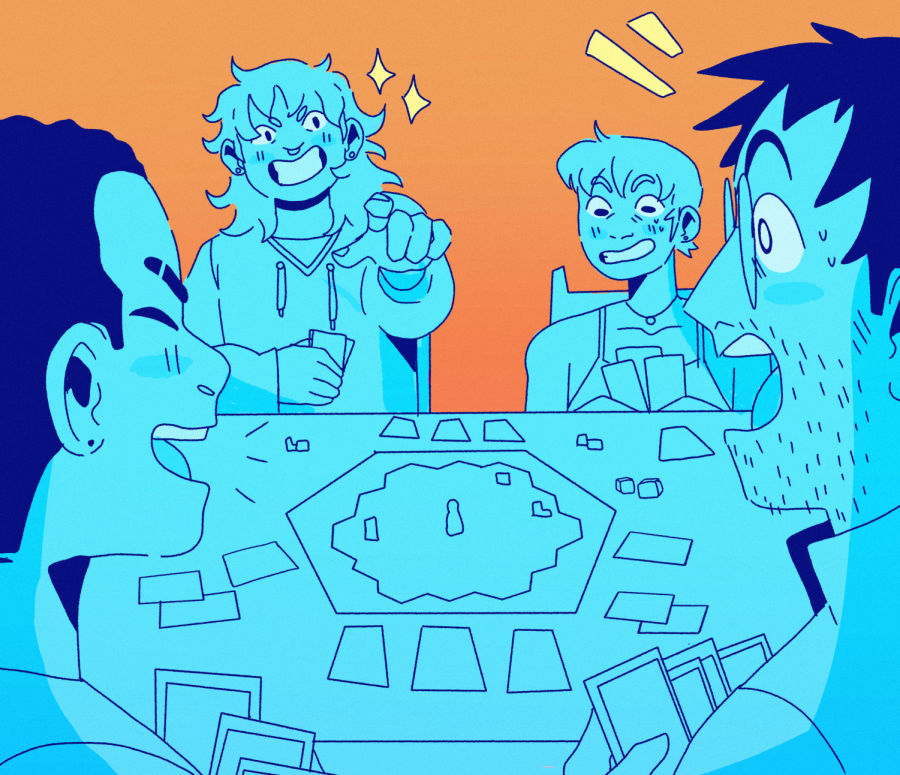 In recent years, the tabletop game industry has witnessed incredible growth; the most recent reports expect the market to grow by about 2.56 billion USD from 2020 to 2025. By then, it is predicted the market will be worth nearly 30 billion USD worldwide (Germany has a massive mainstream market). The responsible party behind this growth is difficult to ascertain, but a number of plausible theories have advanced.

The industry has largely been revitalized by newer games that have been well-marketed to Millennials and Generation Z — games like “Catan” or “Secret Hitler.” Crowdfunding sites — primarily Kickstarter — have allowed indie game developers to overcome large industry players, like Hasbro, to produce innovative, new games rejuvenating the previously stale sector. These games often, but not always, stress strategy and replayability over simplicity and family-friendly themes.

“Tabletop games” serves as a more inclusive term which covers board games, dice games, tile-based games and card games, though often the term “board game” is abused interchangeably.

But the recent popularity of tabletop games doesn’t exclusively extend to new games. Many old games have experienced a period of rebirth as well — notably games like Chess or Euchre.

Between March 2020 and November 2021, the number of users on Chess.com doubled from 30 million to 75 million. Certain factors realized this growth: success of Netflix’s “The Queen’s Gambit,” the rise of chess on streaming platform Twitch and a need for recreation during the pandemic lockdowns.

While the tabletop industry was growing long before the pandemic, COVID-19 undoubtedly stimulated market growth. Although “Tabletop Simulator,” a physics engine that allows people to play hundreds of tabletop games online, released on Steam in 2015, it became one of Steam’s most popular games in 2020.

Aside from COVID-19, “digital fatigue” or “digital detox” is often credited with spurring the industry’s growth. The idea is the shift toward board games is a Luddite-esque counterculture by the youth, rejecting technological recreation in the era of digital addiction. Millennials and Zoomers spend so much time looking at screens that tabletop gaming is a refreshing return to the real world.

And yet, the internet is also largely responsible for the industry’s recent windfall. Reddit and Boardgamegeek.com have allowed tabletop hobbyists to review, rank and discuss games. YouTube has become a hub for instructional videos and entertaining game sessions brought by notable names like Wil Wheaton or Smosh.

Though tabletop popularity may reflect tech weariness, the Jackbox Games collection has also surged in popularity over the last decade. Jackbox Games are played on one’s phone and broadcast on a television screen. They are sometimes played via Twitch livestreaming, but still often require players to be in the same room together, which may indicate their acclaim originates from the enjoyable social aspect of these games.

Another theory is tabletop gaming is a substitute for video gaming. The video game industry has also grown significantly in recent decades, but frustrating trends such as subscription models and a shift away from couch co-op (or splitscreen) options have disenchanted players. Therefore, tabletop popularity is a reaction to anti-social and profit-driven trends in the video game industry.

For the most part, college students have adopted the social activity and dispelled its stigmas. The “nerdiness” associated with gaming has become trendy. Tabletop games have also become a great source for drinking games.

Tabletop games today are diverse, varying widely in complexity, playtime, genre and number of players. They satisfy a competitive itch most people instinctively possess. And yet, some beloved games aren’t competitive at all, but rather collaborative, against the game itself, like “Pandemic” or “The Game.”

One popular genre is social deduction games, where players are meant to behave according to their hidden roles. While some games require players to mull over their own strategies in silence, these types of games force players to interact, fusing gameplay with social bonding. Playing one of these games is a great way to avoid awkward introductions and quickly make friends with strangers, or one can play them with close friends and enjoy the experience just as much.

I personally have a fairly large collection of tabletop games, which I have found to be ubiquitously enjoyed by different social circles. Although different people have different tastes and preferences, some universally-loved games include “Monikers,” “Secret Hitler,” “Sushi Go” or “Codenames.” Some of the classics are still fun too, like an occasional game of Monopoly or the Game of Life, even though chance plays a large role in them.

Tabletop gaming is a great interactive, social, cerebral hobby that is certainly worth exploring. There is a game for everyone. It’s great to see the industry finally finding the popularity it deserves.

Andrew is a senior in LAS.