Click Here To Get The March Issue of WDW Magazine!

Tap Here To Get The March Issue of WDW Magazine!

Star Wars: Galactic Starcruiser cancellations are piling up, and here’s how to use that to your advantage.

The wait is almost over… Star Wars: Galactic Starcruiser is scheduled to open the launch bay doors on March 1, 2022. Whether you’re planning a voyage or just watching the interwebs for a glimpse inside, the anticipation is real.

Just 3-days and 2-Nights Aboard the Halcyon 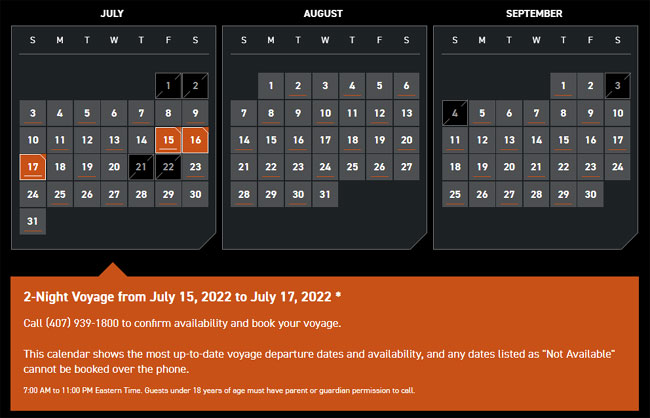 When Star Wars: Galactic Starcruiser was first opened for booking on October 28, 2022, the “voyages” quickly sold out. And unlike seafaring cruises or Walt Disney World Resorts, Galactic Starcruiser bookings can only be made for 3-days, 2-nights, the rigid length of stay.

This set amount of time is reportedly the ideal window for a guest to experience one of the most immersive Star Wars experiences to ever hit the parks. Carefully planned itineraries were designed to take you from guest to Jedi via activities like “Sabacc Lessons” and “Bridge Training” or special “Story Moments” that determine the direction of your path.

? With just a few days for each booking, that means there aren’t a lot of lengthy reservations tying up the calendar as you would see with resorts or cruises.

Lots of dates could become available to book voyages after Galactic Starcruiser cancellations come in.

It pays to check in on availability to see how the bookings are coming along aboard the Halcyon. When I checked today (February 05, 2022), it looks like there are quite a few dates available—a very different picture from the sold-out frenzy last fall.

March remains solidly booked, but those seeking passage to the stars can still journey as soon as April. The grey dates below show current availability for check-in dates:

And for those looking to book in the summer, you’ve got even more options.

Here are the July through September dates now available due to Galactic Starcruiser cancellations:

As you read this, keep in mind that the availability calendar images were captured from my own browsing this morning. Check the Star Wars: Galactic Starcruiser availability calendar for the most up-to-date information. Disney keeps this calendar pretty fresh, but note that you’ll need to confirm these dates with a call to the mouse.

Let’s break down the current availability to see how you can take advantage of Starcruiser cancellations to grab prime dates.

? We expect bookings to skyrocket after March 1, 2022, when Galactic Starcruiser finally opens and the internet blows up with personal accounts of Star Wars life.

Ideal Starcruiser Dates to Keep an Eye On

Remember to dress for the weather. You’ll be spending most of your time inside the air-conditioned ship, where bulky Jedi robes could reign supreme, but the Halcyon will land on Batuu for some on planet fun. It will be hot, so bring a few light options.

While you can use these handy-dandy availability calendars, you can’t yet book Star Wars: Galactic Starcruiser online.

To confirm the dates you want and move forward with booking, speak to a Walt Disney World representative over the phone at (407) 939-5271.

If you’d like someone else to make the call for you and work out all the details, we recommend our friends at Destinations to Travel. Just give them your ideal dates and they’ll handle all the calls to Disney and all the booking paperwork needed to make your dreams sail across the universe.

Extras to Book Before “Sailing” 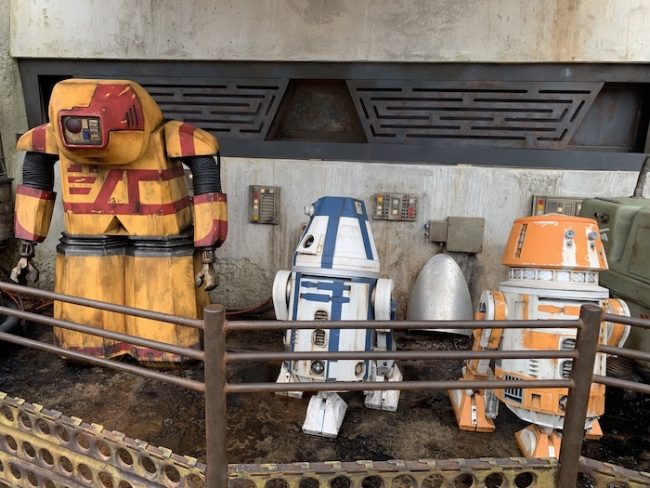 Droids hanging out in the streets of Black Spire Outpost. Photo by Stephanie Shuster

Before you take off, note that there are excursions available on Star Wars: Galactic Starcruiser, just like those extras you can book on a Disney Cruise Line ship. Some of the available extras could tie into your Starcruiser experiences like the lightsaber build and droid build, so pay attention!

Captain’s Table Aboard the Halcyon

This is the only onboard “extra” experience in the Crown of Corellia Dining Room. Like booking Remy or Palo on a DCL ship, but this comes with an extended Star Wars character experience, as the captain of the ship, Captain Keevan, will be sitting with you for the meal. Will Keevan eat and sit with you the whole time? I really want to know how this works.

Secure your spot to build a lightsaber during your Batuu excursion. The sample itinerary released by Disney shows “Lightsaber Training” as an activity that happens on the ship AFTER the trip to Batuu. If you were ever going to build a lightsaber, tying it into your Starcruiser day makes a lot of sense.

Finally getting a guaranteed reservation inside Oga’s Cantina might be what makes me book a Starcruiser voyage.

Note that the “Droid Racing Competition” on the Halcyon takes place AFTER the trip to Batuu, so guests will likely be encouraged to visit the Droid Depot while they are on planet.

Book your extras via Destinations to Travel. They can not only book your trip, but they will take care of anything else you want to schedule. That way, you can start plotting your Galactic Starcruiser costumes instead of worrying about the details.

Star Wars: Galactic Starcruiser Map—Explore the Halcyon Before Your Voyage

Not sure if you’re going? You can just get more information about a potential Disney vacation.

Rain Blanken is the frying pan-wielding editorial director for WDW Magazine. She is a published author who has been working in digital media for 15 years. She is a DVC Member, WDW Annual Pass holder, former Disney Vacation Planner, and would live inside Boma if they would just stop checking under the tables at night. Did you like this article? Tip Rain in tartar sauce…

Time Is Running Out! Tap Here To Get The March Issue of WDW Magazine!