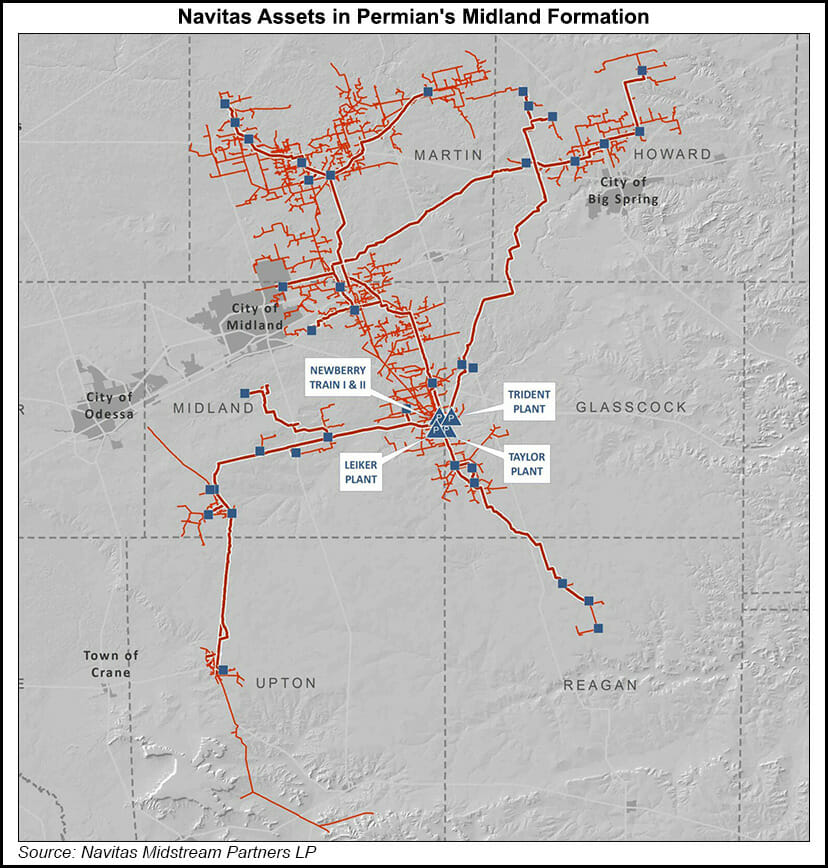 The agreement to acquire Navitas, headquartered north of Houston in The Woodlands, could be completed by the end of March, with an Enterprise affiliate planning to use cash-on-hand and existing credit for the deal..

Enterprise management lauded the move as giving the natural gas processing and natural gas liquids (NGL) business a strong opening in the Permian’s Midland sub-basin, which co-CEO Jim Teague called the “most attractive in the U.S.”

“We do not have a natural gas or NGL presence in the Midland Basin other than downstream pipelines,” Teague said. “This acquisition will give us an entry point into the basin.”

Navitas, backed by private equity firm Warburg Pincus LLC, has secured around 1,750 miles of gas gathering pipelines since it began development seven years ago. Its latest project, the Leiker Plant, is set to be completed before the end of the first quarter. With Leiker, Enterprise would have 1 Bcf/d-plus of cryogenic gas processing capacity in the Midland at its disposal.

The Leiker plant would mark the fifth facility created by Navitas as a part of its Midland Basin Processing Complex in West Texas near the county lines of Midland and Glasscock.

Enterprise already has a bundle of assets in the Midland’s twin sub-basin, the Delaware, which stretches into New Mexico. Included in the portfolio are the 2.6 million bbl Midland Terminal in West Texas and stakes in the Midland-to-ECHO and Basin Pipeline systems that move crude oil to the Cushing Hub in Oklahoma and to the Texas coast near Houston.

[Need Shale prices? Check out NGI’s Shale Daily natural gas prices at 21 locations spanning 16 plays, including the Marcellus, Permian and Bakken, and everywhere in between.]

Enterprise executives said the Midland offered one of the most lucrative opportunities as around 20% of the country’s onshore drilling activity is currently centered there.

The Midland generated 5.4 Bcf/d in 2020, producing about 6% of the total dry natural gas production in the United States, according to the Energy Information Administration.