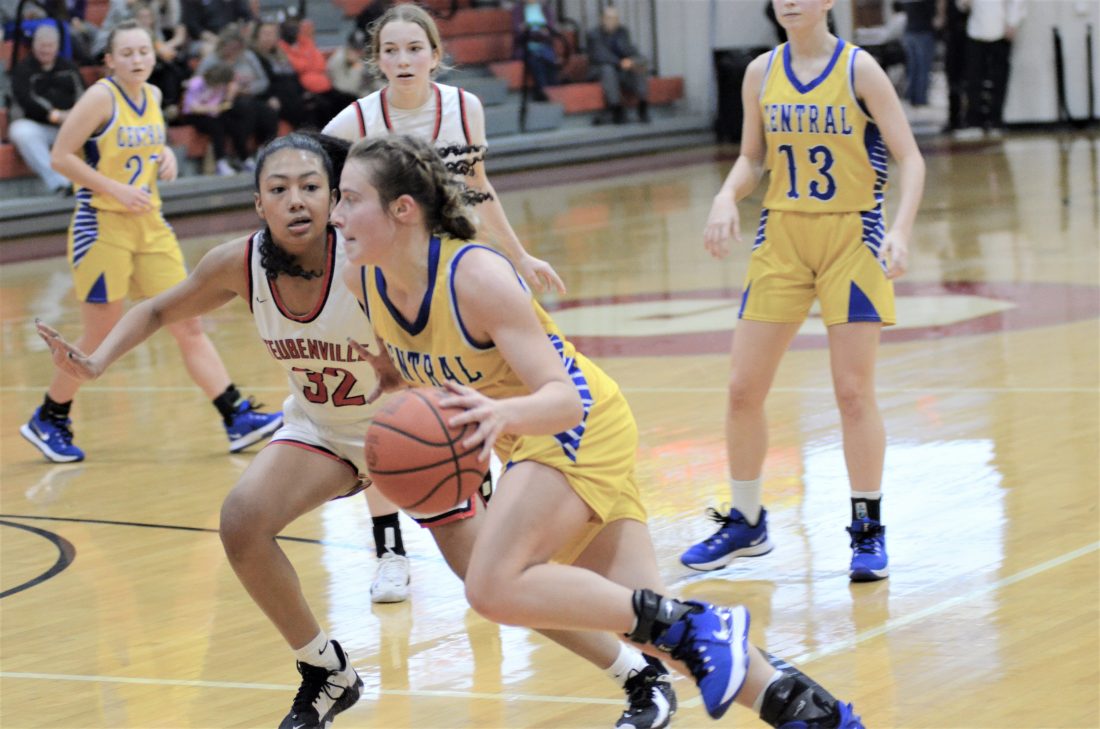 The Crusaders, now 9-3, led 17-11 at the intermission in game one of the annual city championship series. They outscored their hosts 12-4 in the third thanks to eight points from senior guard Katie Zatta and were up 29-15 heading into the final eight minutes. Six of her markers came from makes from behind the arc.

Central maintained its double-digit advantage in the fourth by knocking down eight of 10 free throw attempts.

“I’m just super proud of our girls,” said Central coach Jess Looman. “Our games with Big Red are always tough, emotional, physical battles and today was no exception. Before the game, we told them they would need to play hard for 32 minutes and they did.

“The girls really dug deep and played with so much heart. They worked very hard in practice this week and today all that hard work paid off for them.”

Following Wednesday’s loss to Oak Glen, Big Red coach Angelita Forte pointed out the third quarter has been a major issue to date this season for her club. Those woes continued Thursday as the Big Red could manage just two field goals by senior Elexis Martin.

“I have to put my team in a better position down the stretch in order to win games, whether that is through in-game coaching or practice and preparation, whatever it may be,” Forte said. “It is my job to put them in the right position to be competitive and be in games. Whether it comes down to conditioning or execution, we all have to work as one unit.

“One of our quotes is do your job — personal accountability. Everything comes from the head coach and works its way down. So, as the head coach I have to do what is necessary to pull things together and make sure we are all on the same page. We will continue to work hard, move forward and hopefully we peak at the right time.”

“This is a tough place to play. We thought the game would come down to which team played better on the defensive end,” Looman said. “I thought our defensive effort was outstanding. Any time you can hold a team to under 30 points, you have to be happy as a coach. We got the stops when we needed them. We didn’t play as well as need to on the offensive end but we were able to knock down some big shots.

“Our usual sixth man didn’t dress today so my starters were on the floor more than they normally are. They impressed me with their hustle and hard work. We need to clean some things up especially when it comes to handling pressure but all in all, I’m really happy for the girls. I also thought the girls on our bench played well when they got their opportunities.”

The city rivals will face off again later in the season at Central.

Central returns to action Thursday with a home game against Toronto.

Big Red is back at it Monday, traveling to Dover.

Today’s breaking news and more in your inbox