Alienware X17 gaming laptop is the latest high-performance flagship from the brand. It packs in design and hardware improvements than the previous generation and claims to represent the best a laptop can offer in 2021. Most notable the laptop claims to feature an exhaustively overhauled cooling system, a great keyboard and top of the line performance thanks to the latest chips from Intel and Nvidia.

The laptop packs in an Intel Core i7-11800H CPU with 8-core 16-threads and 4.60GHz of Turbo boost frequency. The CPU is paired with the Nvidia RTX 3070 GPU with 8GB GDDR6 VRAM and 140W TGP. With these specs, my expectation from this laptop includes good performance while gaming and productivity. Starting off with the PC Mark 10 the laptop scored 8633, which is a decent number. For specifics, the laptop scored high marks in gaming and digital content creation. Setting up a roadmap for my expectations with this laptop. 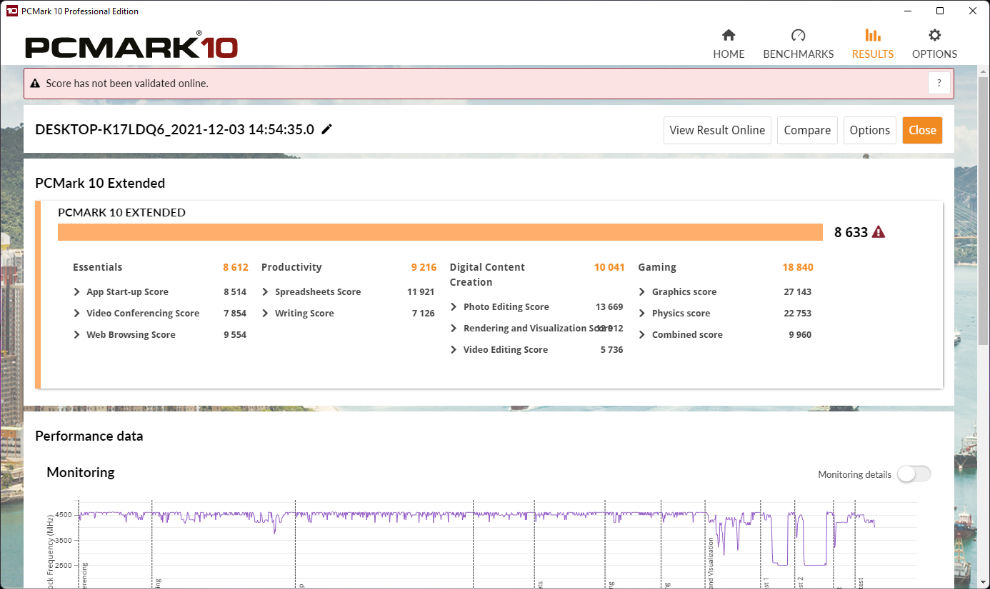 Secondly, we tested the Cinebench R20 benchmark and it scored 5268, which is a high score for CPU performance. Similarity, in the Cinebench R23 benchmark, the laptop scored 1449 in single-core performance, which is one of the highest scores in its class. The CPU also had a multicore score of 13129, which is equally good as well. 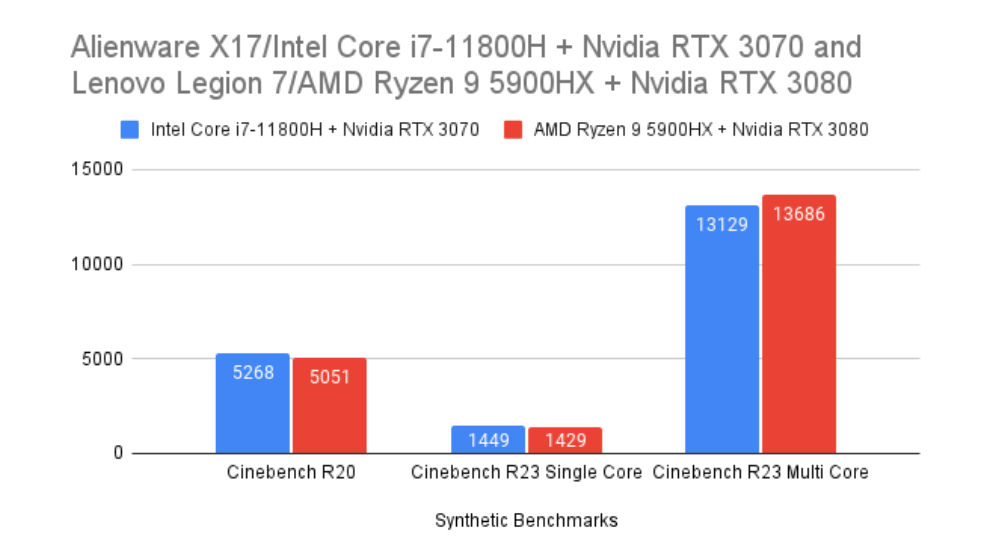 Moving on from the CPU and towards the GPU performance, here are the results. The Nvidia RTX 3070 with the 140W TGP achieve a good score in TimeSpy, which tests the CPU and GPU performance. Next up, I tested the Firestrike synthetic benchmark, which delivered 23158, a high-performance score and hee’s how it stacks up against the competition. 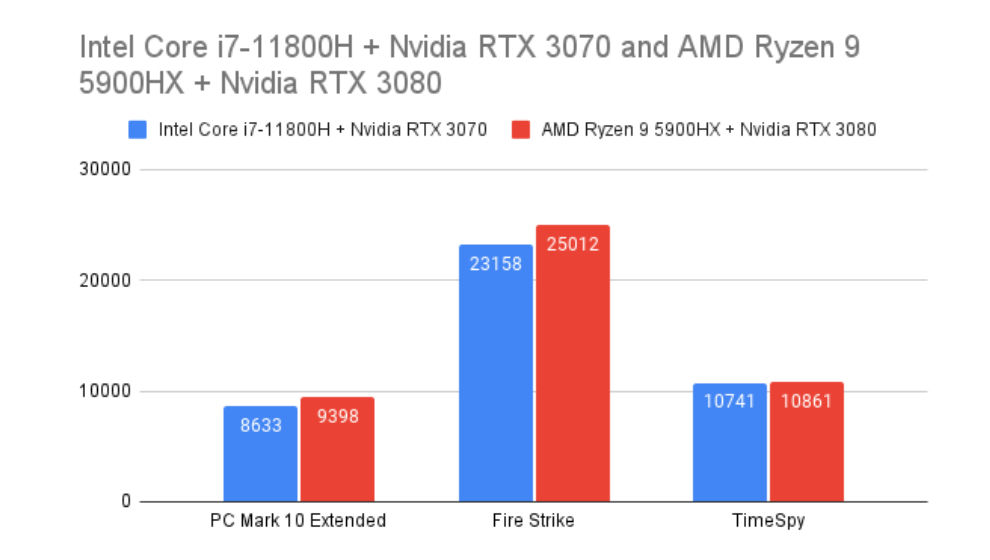 Since it’s an Alienware laptop, it’s designed pretty well and you can feel it in its every shape. This thing feels solid from every aspect, its chassis has no flex, no loose hinge, absolutely nothing. In terms of design elements, you get an Alienware logo on the back along with thin RGB lights near the air vents and all such vents on this laptop have a honeycomb shape as well. I feel that this honeycomb shape has become synonymous with Alienware in recent years, nonetheless, it looks cool and also functions really well, about which we’ll talk in a minute. At first, I need to talk about the rest of the stuff like the keyboard, trackpad and speakers. 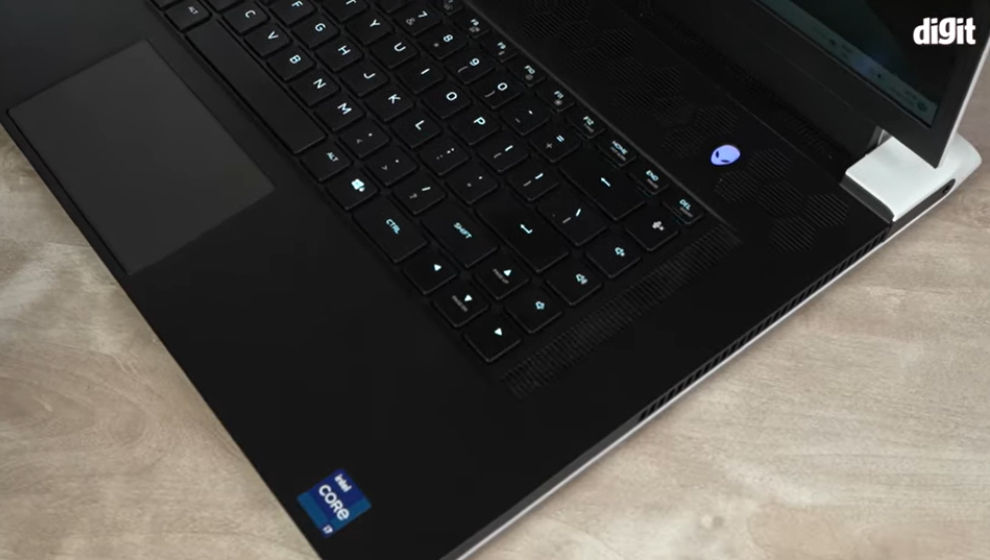 So starting off with the keyboard, the keys have a good amount of travel and offer a good pushback as well. As a result, they do make this keyboard a little bit noisy. You can’t take this into a library and jot away a 1000 words story and expect no one coming to tell you to keep it down. But on the flip side, the keyboard is really good for gaming. Like having confirmation that you’ve clicked a particular button naturally improves the gaming experience and performance. So for gaming, I love the keyboard, for typing, I m fine with it because I don’t mind the noise, but some people can have a problem with it so It’s worth mentioning.

Second, let’s talk about the trackpad, now I have noticed that one of the main things which makes a trackpad good is a high refresh rate screen. The 360hz display on this laptop is fast and allows the trackpad to make good use of it. The trackpad is very small in size but I found it enough for my daily use as with just one swipe I was easily able to move the pointer over a larger distance onscreen. So trackpad, Personally I have no issues with it. But considering the price of this laptop, I’d want to see left and right clickable buttons on this thing as well.

Next up, the speakers, now they sound very bad considering the price point of this laptop. It’s really a shame as even the entry-level M1 Mac which probably costs way less than this device has world-class speakers, Dell’s own XPS 13 has great speakers, but their flagship gaming laptop just has these sub-par units which ruin the excellent gaming experience it seeks to provide. My recommendation would be to either use headphones or external speakers.

So to recap the laptop is built well, has a good keyboard and trackpad combination, but has bad speakers. 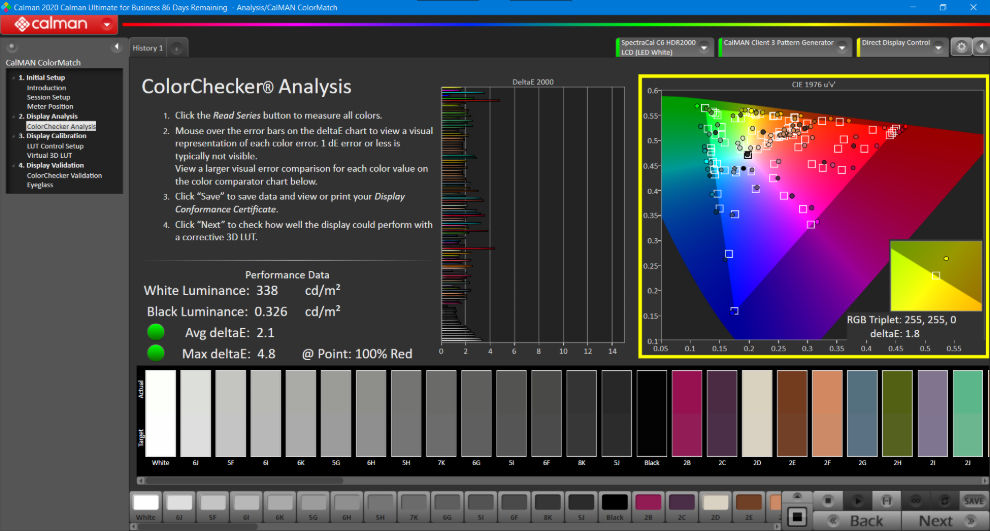 Moving on to its screen and it is a good one for gaming. It is a 1080p 360hz display, which will serve you really well while playing esports titles. In fact, I even won my first amateur Valorant tournament thanks to the high refresh rate display and I don’t even know how to play the game properly. So the screen is good for gaming, but not for editing as it’s decently colour accurate. 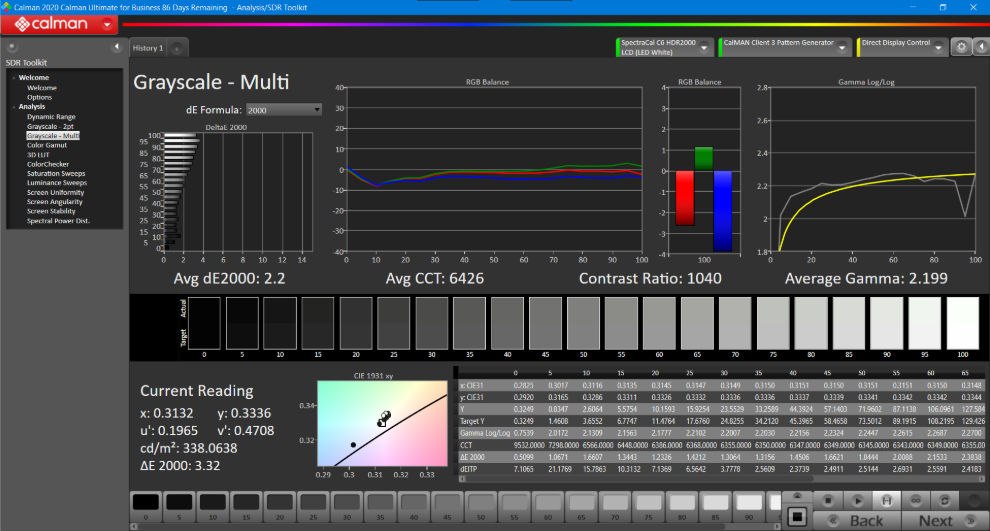 Now before I move on to talk about gaming performance, we need to discuss its cooling. The laptop has four fans and it uses a special thermal compound to cool its internal components. Considering that it’s packing an eight-core CPU and an Nvidia RTX 3070 inside, this thing remains cool even in a non-AC room and that’s a huge improvement because the X-line of Alienware laptops are thinner than last year’s model and yet they can stay much cooler while gaming. Also, here’s a comparison with the competition to give you a reference as to how hot these things usually get. 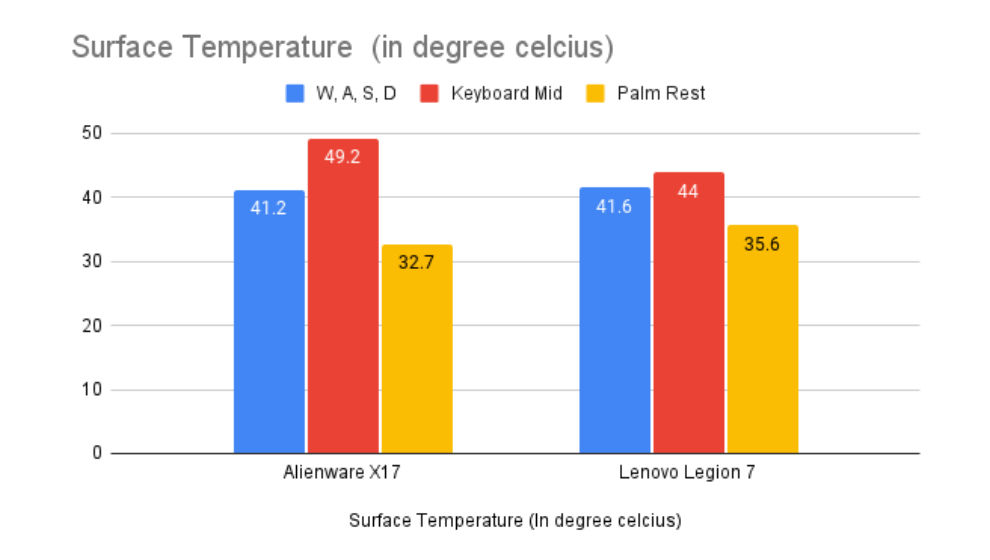 With that being said, here’s how the laptop performs in some demanding AAA titles. Now, remember that this laptop uses the Nvidia Optimus, which bypasses the integrated graphics to deliver 5-10% better performance in games.

First up we tested the Dirt 5, and this laptop ran the title continuously at above 100 FPS. Now Dirt 5, as you remember, was one of the first “Next-gen” titles for Xbox Series X and PS5. The game ran on 120FPS on those machines in performance mode, so considering that the Alienware X17 absolutely crushed this game by running it close to 90FPS at a fixed 1080p resolution at ultra settings. I am pressed to say that I am pretty impressed. 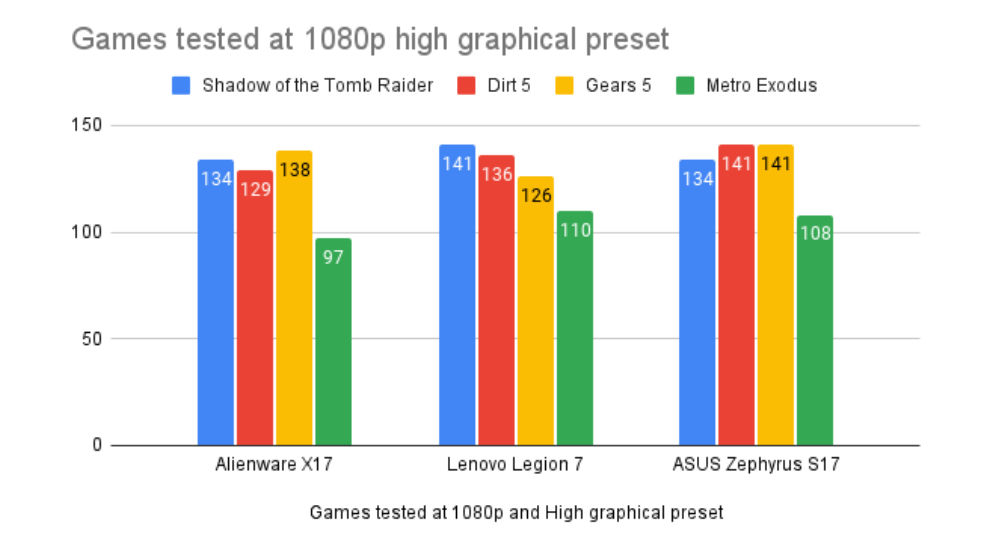 Next up, I tested AC Valhalla which is a demanding title so I decided to push the laptop even further by running the title at ultra-high graphics quality setting at a fixed 1080p resolution. The benchmark started strong by delivering between 70-85 FPS, constantly fluctuating in this range. Sometimes touching close to 100FPS in open areas and sometimes dipping down to low 60FPS in crowded scenes. However, the overall FPS of the game remained above 60FPS and mostly between the 70-85 FPS range. In my personal experience, one can play this game at around 85FPS using an RTX 3060 laptop in medium settings so the kind of performance Alienware is delivering is quite good and it’s doing so while staying pretty cool as well.

In all these games we did not tinker with any DLSS feature, so you can expect even more performance once you enable that in select games. To give you a better picture, here’s how the laptop performs as compared to some other laptops in the ultra-high-end performance range. 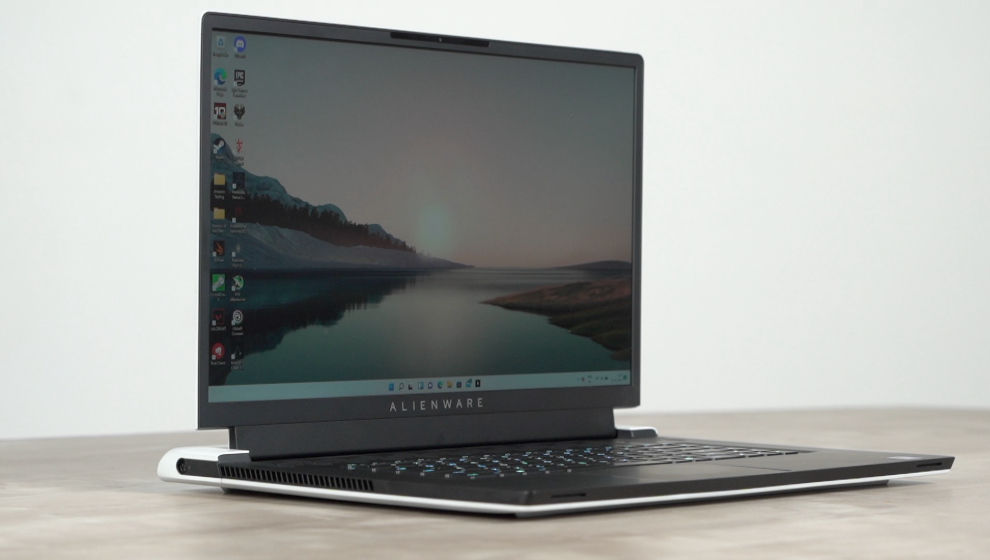 So overall the Alienware X17 is a good gaming laptop and with a price tag that is close to Rs 3 lakh, it is also quite expensive. The highlighting factor of this laptop is that its willing to go above and beyond the competition in terms of build quality and the overall quality of the components, now other laptops in a similar price range may or may not be able to do so. But the fact remains that travelling that extra mile in terms of build quality still remains very expensive for a lot of consumers.